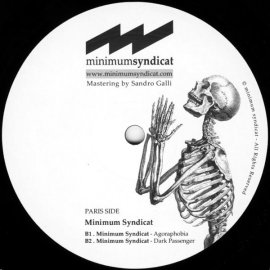 50%% from Rome, 50%% from Paris, 100%% underground acid for deviant dancefloors. Feedback (MinimalRome) takes you into a pitch black club based in some dangerous at night sex-district. Nasty acid house vibes guaranteed. Pionneer of the infamous ‘sound of Rome’, Sandro Galli (ACV, Hot Traxx) chose Minimum Syndicat to make his come back with an out-of-this-world track that just keep climaxing into oblivion. On the other side, Minimum Syndicat explores the catacombs of the original acid rave sound : sinister 3-0-3 drenched in cavernous reverb, taking control of your nervous system like an alien parasite. Expect no compromise.