For those who missed it, here is one of the best film about the life of Nikola Tesla.

The Secret of Nikola Tesla (Serbo-Croatian: Tajna Nikole Tesle), is a 1980 Yugoslav biographical film which details events in the life of the discoverer Nikola Tesla (portrayed by Serbian actor Petar Božović). Tesla was born to ethnic Serb parents in 1856 Croatia (at the time, part of the Austro-Hungarian Empire). He arrived in New York in 1884, became an American citizen in 1891, made immense contributions to science and died in Manhattan at age 86 during World War II in 1943.[1]

This biography includes references to his amazing abilities of detailed mental visualization as well as the slowly intensifying personal habits, indulgences or eccentricities for which he became nearly as well known. The film portrays Tesla in a battle with Thomas Edison over the clear superiority of Alternating Current over Direct Current. It also depicts Tesla’s dream of supplying consumers all around the globe with limitless free energy.

Croatian director Krsto Papić assembled a cast which includes three American actors playing iconic personalities of 19th and early 20th century America, J. P. Morgan (1837–1913), Thomas Edison (1847–1931) and George Westinghouse (1846–1914). Morgan is portrayed by Orson Welles, while Croatian actress Oja Kodar, Welles’ companion for the last 24 years of his life, has the role of Katharine Johnson (1855–1924), with whom Tesla corresponded for many years, and whose husband, Robert Underwood Johnson (1853–1937) (portrayed by Croatian actor Boris Buzančić) was a poet, scholar, diplomat and Tesla’s longtime friend and supporter. The other Americans in the cast are character actors Strother Martin (who died six weeks before the film’s September 12, 1980 English-language premiere at the Toronto Festival of Festivals) and Dennis Patrick as Westinghouse and Edison, respectively.[2]
Enjoy

He has produced nothing tangible for a long time, but he still remains one of the foremost living inventors of electrical apparatus. His day comes once a year. On his birthday Manhattan newshawks seek him out in some hotel, listen closely to his words. Wearing an outmoded brown suit, he received the Press one day last week in a Hotel New Yorker reception room. That day Nikola Tesla was 78.

The first thing Nikola Tesla invented was a hook for catching frogs. That was not long after he learned to talk, in the Croatian hamlet of Smiljan where he was born. He studied physics and mathematics at two universities, got into telegraph engineering, went to Budapest, to Paris, to the U. S. in 1884 to work for Thomas Edison. Soon he had a research laboratory of his own. Four years later he patented the induction motor, first effective utilization of alternating current. He discovered the rotary magnetic field principle used today in the hydroelectric plants at Niagara Falls. He invented dynamos, transformers, induction coils, condensers, arc and incandescent lamps. He was acclaimed a great genius.

END_OF_DOCUMENT_TOKEN_TO_BE_REPLACED

In 1898, Tesla demonstrated a radio-controlled boat—which he dubbed “teleautomaton”—to the public during an electrical exhibition at Madison Square Garden. The crowd that witnessed the demonstration made outrageous claims about the workings of the boat, such as magic, telepathy, and being piloted by a trained monkey hidden inside. Tesla tried to sell his idea to the U.S. military as a type of radio-controlled torpedo, but they showed little interest. Remote radio control remained a novelty until World War I and afterward, when a number of countries used it in military programs.

Tesla took the opportunity to further demonstrate “Teleautomatics” in an address to a meeting of the Commercial Club in Chicago, while he was travelling to Colorado Springs, on 13 May 1899.

END_OF_DOCUMENT_TOKEN_TO_BE_REPLACED

A recently discovered set of original Nikola Tesla drawings reveal a map to multiplication that contains all numbers in a simple to use system. The drawings were discovered at an antique shop in central Phoenix Arizona by local artist, Abe Zucca. They are believed to have been created during the last years of Tesla’s Free Energy lab, Wardenclyffe. The manuscript is thought to contain many solutions to unanswered questions about mathematics.

END_OF_DOCUMENT_TOKEN_TO_BE_REPLACED 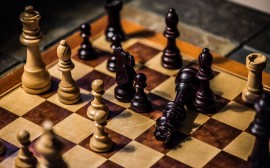 During his second year of study at Graz, Tesla developed a passion for (and became very proficient at) billiards, chess and card-playing, sometimes spending more than 48 hours in a stretch at a gaming table.

END_OF_DOCUMENT_TOKEN_TO_BE_REPLACED

Tesla was asked by the Red Cross to predict man’s greatest possible achievement over the next century. The letter below was his reply. 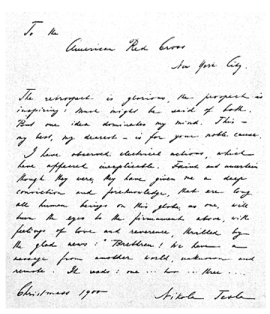 Here is the transcription

The retrospect is glorious, the prospect is inspiring: Much might be said of both. But one idea dominates my mind. This — my best, my dearest — is for your noble cause.

I have observed electrical actions, which have appeared inexplicable. Faint and uncertain though they were, they have given me a deep conviction and foreknowledge, that ere long all human beings on this globe, as one, will turn their eyes to the firmament above, with feelings of love and reverence, thrilled by the glad news:

“Brethren! We have a message from another world, unknown and remote. It reads: one… two… three…” 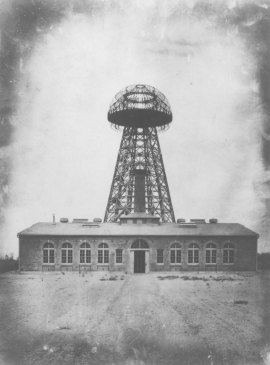 “In recent years I have devoted myself to the problem of the wireless transmission of power. Power can be, and at no distant date will be, transmitted without wires, for all commercial uses, such as the lighting of homes and the driving of aeroplanes. I have discovered the essential principles, and it only remains to develop them commercially. When this is done, you will be able to go anywhere in the world — to the mountain top overlooking your farm, to the arctic, or to the desert — and set up a little equipment that will give you heat to cook with, and light to read by. This equipment will be carried in a satchel not as big as the ordinary suit case. In years to come wireless lights will be as common on the farms as ordinary electric lights are nowadays in our cities.”  N.T.

“Power will belong to everyone like the air we breathe”

“A Famous Prophet of Science Looks Into the Future” 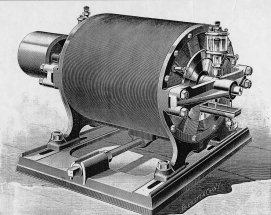 “I would not give my rotating field discovery for a thousand inventions, however valuable, designed merely as mechanical contraptions to deceive the eye and the ear. A thousand years hence, the telephone and the motion picture camera may be obsolete, but the principle of the rotating magnetic field will remain a vital, living thing for all time to come. ” N.T.

END_OF_DOCUMENT_TOKEN_TO_BE_REPLACED

“Fragments of Olympian Gossip” is a poem that Nikola Tesla composed in the late 1920s for his friend, George Sylvester Viereck, an illustrious German poet and mystic. It made fun of the scientific establishment of the day. END_OF_DOCUMENT_TOKEN_TO_BE_REPLACED 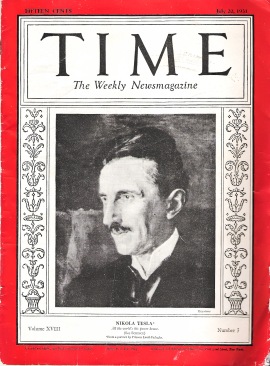 “[I have conceived] a means that will make it possible for man to transmit energy in large amounts, thousands of horsepower, from one planet to another, absolutely regardless of distance. I think that nothing can be more important than interplanetary communication. It will certainly come some day. and the certitude that there are other human beings in the universe, working, suffering, struggling, like ourselves, will produce a magic effect on mankind and will form the foundation of a universal brotherhood that will last as long as humanity itself.” — Nikola Tesla